The Caln Meeting House is one of the oldest and most historic places of worship in Chester County, as well as in the state of Pennsylvania. In 1716 the Caln Preparative Meeting was set up, and a log Meeting House was built. Tradition indicates that it was located in the valley on John Mendenhall's land in today's Village of Thorndale and was known at that time as the Calne Meeting. A new site on "top of ye mountain" was selected and approved by a committee for building on land owned by Richard Pike. That Meeting House was built in 1726 in a grove of trees on "Packets Path" which led from the Brandywine Creek to the Conestoga Trail. In later years this bridle path became the King's Provincial Highway, or Lancaster Pike, and was for a time the main artery from the eastern seaboard to the West. This two room building was further enlarged in 1801 to accommodate the new Quarterly Meeting of Caln.
At the beginning of the nineteenth century, a conflict developed between conservative, evangelical Friends who emphasized the life and teachings of Christ, and more liberal Friends who placed more emphasis on the Inner Light as the basis of Quaker faith. This growing controversy resulted in the Quaker Separatist Movement of 1827, creating a sharp division between the conservative, Orthodox Friends, and the liberal, Hicksite Friends, so named because of their leader Elias Hicksite.
Caln Friends Meeting is noteworthy as the only Meeting in this area in which Hicksite and Orthodox Friends continued to meet in the same Meeting House, although in different rooms. The Hicksite group, being in the majority, was deeded the building and property, and used the West room for their Meeting. The Orthodox group used the East room. In 1949 the Hicksite and Orthodox Meetings joined as a unified group in their Meetings for Worship. Because the two factions had met in the same Meeting House during the years of the Quaker Separation, Caln Meeting was regarded by other Friends as a neutral ground. It continued to be the scene for active Quarterly Meetings, attended by Friends from afar, as well as many rural non-Friends.
Except for the last Sunday of the month, meeting for worship is held at the Meetinghouse every Sunday at 10:30 am. All are welcome.  Old Caln is the home meeting of the Philadelphia Yearly Meeting's Caln Quarterly Meeting. Historically, Sadsbury and Bradford Monthly Meetings have had an Old Caln oversight role. The building is presently used as a meeting place for various community organizations. Documents of Caln Friends Meeting at the Haverford College Library and the Chester County Historical Society record the history and culture of many early Pennsylvania settlers.

The cemetery behind the Meeting House contains many early graves marked only with plain field stone. As time passed, however, the majority of graves were marked with inscribed marble stones. The earliest marked gravestone is from 1754. In 1803 Colonel Humpton, a Revolutionary War hero, was buried there.  The Orthodox and Hicksites have separate burial grounds. Below is a list of all the marked graves in the cemetery, including many persons who played important roles in Caln and Pennsylvania history.
Additional history of this historic building can be found on the Friends website at www.oldcalnmeetinghouse.org 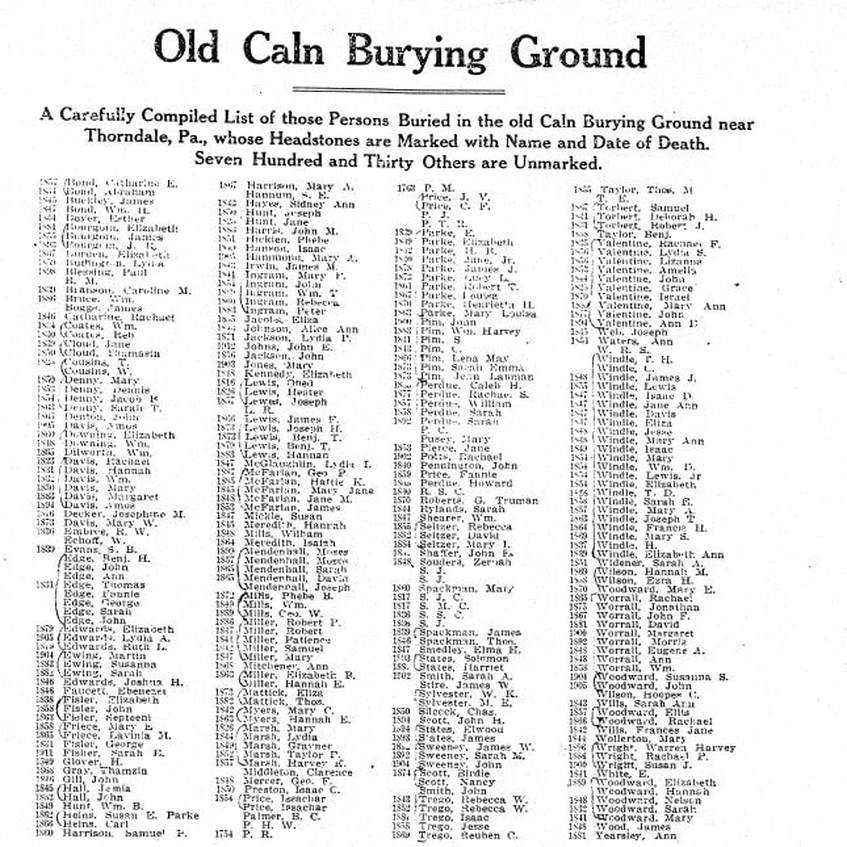